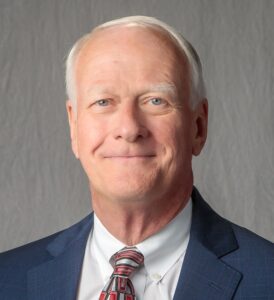 Donald “Don” Colliver has been involved in the energy usage and efficiency of buildings for over 40 years. He is Professor in the Biosystems Engineering Department, and formerly Director of Graduate Studies in the BAE Department and Director of the Kentucky Industrial Assessment Center at the University of Kentucky. He is a licensed Professional Engineer in the Commonwealth of Kentucky.

Professionally Don has conducted and managed extensive research in energy usage in buildings and industrial facilities, solar energy, air infiltration and ventilation, building codes, and the analysis of climatological data for determination of design weather conditions. His team developed the first dehumidification design weather data that was published in the 1997 ASHRAE Handbook – Fundamentals.

He was the ASHRAE Society President in 2002-2003. As a result of his initiatives and leadership, ASHRAE launched the Advanced Energy Design Guides – a series of publications that provide guidance on designing and constructing buildings that lead toward net-zero-energy buildings. He served as the leader of this project for ten years during which time ten books were produced which now have over 700,000 copies distributed.

Prior to his service as ASHRAE President he served as Society President-Elect, Treasurer, Vice President, Director-at-Large, and Chair of Technology Council, Education Council and the Standards Committee. He has subsequently served as Chair of the ASHRAE Honors and Awards Committee, the National Engineers Week, and Vice Chair of the ASHRAE Foundation. He is an ASHRAE Fellow and recipient of the Andrew T. Boggs Service Award.

He served as Director of the KY Industrial Assessment Center from 2014-2021 and participated in over 80 energy assessments in industrial facilities that have resulted in implemented recommendations that save on average $110,000 per year per plant. In November 2019 he designed and installed a ground-mounted 10.2kW solar photovoltaic system for his house which has resulted in a maximum monthly electric bill of $19 since then.

Don was chosen to be the initial Co-Chair of the ASHRAE Task Force for Building Decarbonization and currently serves as Vice Chair.

He was awarded a doctorate from Purdue University; and is a hiker, viticulturist, and a retired soccer referee. He has been an active member of the Central Baptist Church in Lexington Kentucky for over 40 years where he has served as Deacon and Moderator. His love and pride are his wife, two sons and daughter-in-laws, and five grandchildren.

Disclaimer: This web site is maintained by the Bluegrass Chapter of ASHRAE. It does not present official positions of the Society nor reflect Society policy. ASHRAE chapters may not act for the Society and the information presented here has not had Society review. To learn more about ASHRAE activities on an international level, contact the ASHRAE home page at http://www.ashrae.org.

A special thank you to our RP sponsors